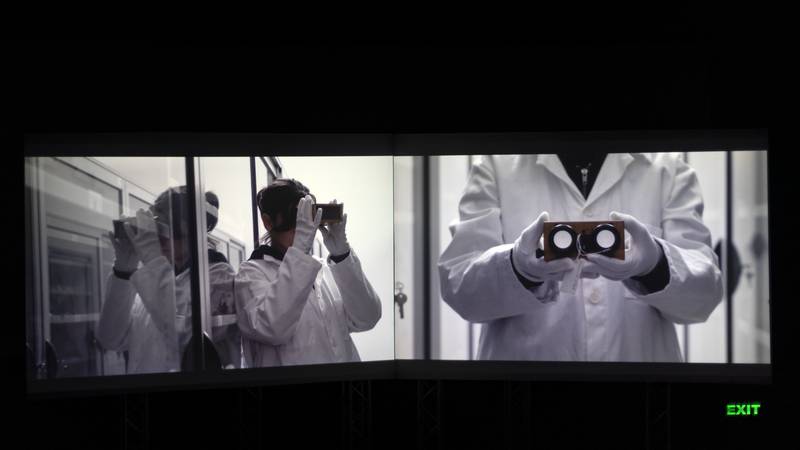 Sixteen multi-channel films and video installations by pioneering filmmakers and artists, many of them Asian premieres, will be presented in the cinema in a two-day festival within the 20th Mami Film festival.

THE NEW MEDIUM considers cinema as a relatively new medium, when seen alongside the other spatial and temporal arts: painting, sculpture, architecture, music, poetry, and dance, but also the one in which impossible movements between all the arts can happen. This is the third year of THE NEW MEDIUM program.

There is no good reason to use only one screen in cinema. This has been obvious to filmmakers and artists for a long time. Multi-screen apparatus was part of the Expanded Film movement of the 1960s, and multiple video feeds were used for live feedback by performance artists since pretty much the advent of the medium. But there are also contemporary, cinematic reasons to be excited about multi-screen cinema. On the one hand, so many of our conventions around camera, sound, editing, duration, narrative and reception are oriented towards single screens. More than one screen immediately challenges a lot of our rituals and habits, and lures us into a world where different conditions may abound. As New Wave pioneer Agnès Varda puts it simply in the title of her work: 3 moving images. 3 places. 3 rhythms. 3 feelings. How will cinema negotiate the time of more cameras than people, more distraction than attention? What is its formal response, its ability to invent amidst chaos and multiplicity, and without reverting to a grand tradition? Varda seems to say we can be precise in our answer: 3 feelings, 3 screens.

Today it is not unusual to see film works made for three, four and even eight and twelve projections playing on loop in a museum or biennial. Such an environment has its obvious downsides: a culture of people casually entering and leaving at any time, and generally non-optimal seating, sonic and viewing conditions. This year's THE NEW MEDIUM program has a proposal that to our knowledge has never been done before inside a cinema hall: A full festival program of innovative multi-screen cinema, retaining the intimate, engulfing feeling of installations, but pushing the cinema effect with timed shows, seated audiences and surround audio.

When the documentary film movement in India was asking, over a decade ago, “where are the screens?”, they were referring to the shift to digital that had made film production independent, but not necessarily its reception. We had hundreds of films, but no screens to show them. Today, with Netflix and Mubi, Karagarga and Indiancine.ma, the options for watching and appreciating film are multiple, and yet largely single, private screens. In this sense Multi-Screen Cinema is also a metaphor: For collective viewing, for faceted yet shared experiences, and for a proper cinematic use of the term 'Multiplex".

Over two days, the world will be let in via a multitude of great artists and their work, surrounding us with many more than “3 feelings”. They encourage us to take nothing technological, and not even the familiar experience of cinema, for granted. What follows is a quick tour through the program.

At the age of 90, Agnés Varda debuts her first multi-channel work. Taken from her films Vagabond, Documenteur and The Gleaners and I respectively, the work is 3 single shots, each with a different speed; the sound comes and goes, and then multiplies. Varda sets the stage by showing us what a multi-screen grammar might look like. This language is at once complicated by Piyush Kashyap, a young film editor who, working with the film scholar Ashish Rajadhyaksha, pulls sequences from Mani Kaul's documentaries on art forms including poetry, music, sculpture, cinema and performance. Iti - The End (2017) is a “new” three-screen Mani Kaul treatise on aesthetics and cinema that does not separate or alienate us but pulls together new relations between old and new things. The triptych The Cyclops Cycle (2004), an anthology of shorts by structural filmmaker and pioneer of Expanded Cinema Malcolm Le Grice, uses repetition and subtle editing differences to fine-tune our understanding of non-narrative patterns in film and Polyptych cinema.

A contemporary poet and a dancer bookend The Third Part of the Third Measure (2017) by each performing a statement that Afro-American avantgarde music composer Julius Eastman made public, when the titles of his compositions were found objectionable. Between these re-readings, four pianists on two pianos and two screens perform his militant scores. Within this structure, The Otolith Group makes visceral the words and sounds of Eastman, whose recordings were never released in his lifetime. Similarly, Jeamin Cha accesses transcripts from twelve meetings the Wage Commission in Korea had conducted while negotiating the annual national minimum wage. She culls a ‘screenplay’ from them, that is then skillfully performed in Twelve (2016) by 4 x 3 actors, a screen each representing the business owners, the government body, and the workers union. Forensic Architecture re-enacts using both computers and physical models, the scene of the shooting of Turkish-German Halit Yozgat in Kassel, one of several organised racist killings by Neo-Nazi groups. With FA’s well-defined mode of merging the disciplines and aesthetics of forensics and architecture, they expand the 77sqm_9:26min (2017) space and time of the event, and approach it from multiple perspectives and media in quest for the truth about the murder. SOS-Adoptive Dissensus (2009) is a documentation of a remarkable performance Minouk Lim set around the Han River in Seoul in which a tour-boat operator, a searchlight, two lovers and a group of protesters interact.

The written word, text as image and sound gains profound meaning in Allora & Calzadilla’s The Great Silence (2014). In it, writer Ted Chiang’s poetic essay is embodied by endangered Amazona Vittata parrots in Puerto Rico who hope that Arecibo, one of the world’s largest radio telescopes is listening to them, even as it seeks for signs of intelligent life on other planets. In The Dreams of Cynthia (2017), Pallavi Paul translates Anish Ahluwalia’s Hindi poem Cynthia Ke Sapne, into a bi-lingual text that punctuates the lives of the two protagonists, a transwoman artist and a hangman in Northern India. Naeem Mohaiemen eschews voice-over, opting for text inter-titles in his feature-length 3-channel film Two Meetings and a Funeral (2017), which brings together archival recordings from the NAM summit in Algiers, modernist third world architecture and the commentary of interlocutors to look back at the potentials and fallouts of the Non-Aligned Movement.

In our second feature, The Burial of the Dead (2016) filmmaker Salomé Lamas takes on the practice of observational ethnographic documentary, extending our sensibilities and gaze across three screens in an startling portrait of a gold mining town in the Peruvian Andes, 18000 feet above sea-level, the highest permanent settlement in the world. Anthropologist and filmmaker Steffen Köhn and cinematographer Paola Calvo present us with A Tale of Two Islands (2012), a documentary short about travel and migration between two islands in the Indian Ocean, one a part of the French Department, and the other in the Comoros Union. This form of “binary” relationship between 2 screens and between movement and internment is further explored in a compilation of shorts.

Ursula Biemmann’s Contained Mobility (2004), is an account of a Belarusian refugee’s migration pattern from the Siberian Gulag to the UK, alongside an EU landscape of data flows and security systems. A prisoner in a high security prison near Paris was tasked by The Museum of European and Mediterranean Civilisations to digitise a collection of early 20th century stereoscopic images of travels through Europe, photographed by a Cossack who left Russia before the revolution. Uriel Orlow’s Veilleurs d’Images/Image Guardians (2017) delicately intertwines their stories and presents us with left and right “Stereo” images.

A viral music video for the song #blacktivist by the Flatbush Zombies, directed by Mario Pfiefer is presented here in its expanded avatar, juxtaposed by the artist with footage from a workshop in Texas that makes open-source 3-D printed guns. In our final two-screen, Commensal (2017) by visual anthropologists Lucien Castaing-Taylor and Véréna Paravel of the Harvard Sensory Ethnography Lab, 8mm home movie footage of the brothers Issei and Jun Sagawa as children growing up in Japan plays at its own pace alongside an edit of a close-up interview with the Sagawa brothers in the present, and the manga Issei made illustrating his own act of cannibalism.

6 women artists and filmmakers, 5 men and 5 collectives. 16 films. Making this program possible inside a cinema environment has been a labour of love of building, encoding, syncing and coaxing, produced entirely by a group of artists who share a passion for technology and cinema. We hope to see you there.


With many thanks to: