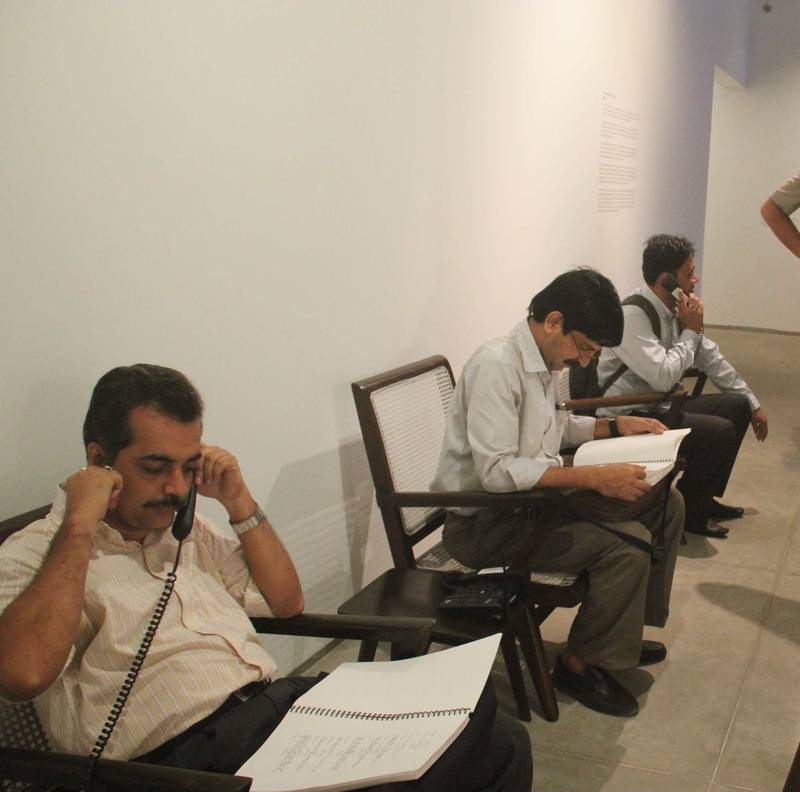 Act I is a screenplay in which some of these texts re-group, trying to again become images, and sounds. Threatening to appear in a certain three-hour, melodramatic format. This screenplay is based on four days of the Radia tap(e)s, prior to the formation of the cabinet of ministers after Indian general elections in 2009.


Act II is a film that begins where the screenplay ends. It is more modest, perhaps imagining life as an online video. It begins when some top journalists claim that they were just lying to Radia "a source" on the phone, their conversations had no basis in and impact on reality. This paradoxically opens a window into the  broader spectrum of rhetorics: including lies, cries, memes, pen drives, bad networks and family feuds, pulsing through the nervous system of Indian democracy.

Essay in the Ungovernables Catalog

How to Feel a Leak?

The question, then, is not so much that of how to get people worked up and engaged, but rather how to perturb an operationally closed system in such a way that the perturbation is not registered as mere noise but rather generates information that leads to the selection of different system states.

All systems, including so-called “open systems,” revel in a kind of tunnel vision. In systems theory, this tunnel vision is called operational closure. [1] Which means that a system only “sees” other parts of itself, and is open only to those external events it at least partly anticipates, or can organizationally process. The rest is noise, or blackness, or worse. (We could remind ourselves that human-body systems did not “expect” nuclear radiation, and cannot process mains electricity or crude oil.)

Water flowing into Mumbai from distant reservoirs has no way to “feel” the people walking on or living next to its pipelines. The water distribution system only sees pumping stations, bends, pressures, and consumers; it hears very faintly, and cannot recognize, the protestations coming from neighborhoods and farms that it bypasses or even, tragically, the rain that falls down all over its “network.” Systems simply translate all external influences into their own internal terms. So that dharnas (protests) create only the most insignificant of ripples inside a water pipe. Operational closure appears then as a horrifying dystopia: How do we ever connect a water system to a people or a society? How can people ever care for or influence a water system? If the axiom of operational closure holds, then it is not possible to do this directly; we need governments, councillors, plumber mafias, money, and other powerful chains of mediators in order to make any connection at all. Is this just the price to be paid for modern life? Or can such an ontology also lead to other consequences, other tones, especially if horror and dystopia are not one's favorite genres? Are we ultimately looking for "systemic reforms", or are there other possibilities entirely?

Water leaks, all the time. A leaking pipe casts some doubt on its own systematicity. How open can an “open system” be? (How much material and energy can really be exchanged with the environment, while still maintaining oneself as a system?) Leaks are the exact opposite of a system's ability to translate everything into its own terms. It is when something internal escapes such terms altogether, and can produce unforeseen relations and operations, that it is said to leak. If an incoming flood into a basement is unassimilable, disastrous, does this mean that the system has changed state, or is it a new ecosystem altogether, with marine life and new electrical dangers? Leaks, in the willful and ideological sense in which, say, Wikileaks operates, or as the metaphorical and astructural phenomenon that Raqs Media Collective calls “seepage,” or as an actual battleground for infrastructural control across the physical, chemical, wasteful, or managerial aspects of the supply chains of any city, all perturb a “systemic” understanding of reality. Leaks possess timing tricks and sideways moves that often surprise and overwhelm systems.

Leaks cannot operate in a vacuum. So their defense, on the one hand, relies on a relationship with existing structures, usually an implied one of critique, which is only the first step in imagining what to build next. On the other hand, the promises that leaks make are necessarily vague, pointing toward an infinite, suspended potentiality. A cloud that fills the sky but never rains . . . is a fog. More leaks, mean more fog. To say that leaks themselves are a form of freedom is too much like saying that information is “out there,” or that clouds have enough water for everyone on earth. In this situation, what we may need is what in the Peruvian mountains is called a “fog catcher”: the art and science of luring a cloud and making it rain a bit, for you. And ideally, for everyone else in your village, too.

Let’s be more concrete. Leaks are somewhat inevitable, as electricity providers, ship engineers, and book publishers have found out. In each case, there have been ways to feed leaks back into adjoining systems of management and control. Ships have bilge pumps but also ballast tanks. Electricity providers “farm” leaks by bringing them into billing regimes, even if the recipients themselves are illegal and without identity papers. Book publishers deploy legal threats while hastily building their own e-book platforms, hoping that some people would rather pay a dollar than commit a crime. The water mafia has a keen understanding of, and hunger for, leaks. The limits of a critique of structure are clear. In such cybernetic loops, leaks and structures become indistinguishable. Another approach is needed. Our fog-catcher image suggests that it is not only a matter of catching or releasing leaks. It is also a matter of how to tune into them, using specially made antennas and a collective sensibility. Ultimately, to turn them into something else—a fog into a hot soup, a TV transmission leaking from across the border into a VHS birthday present. [3] This seemingly magical project is also one of art: of small humans trying to seduce and transform something large, unformatted, and unruly.

This cannot be done with one's “bare hands.” Digital leaks, for example, tend to produce a volume of material that cannot be understood easily. One is awash in it, and yet unable to grasp anything. The situation suggests new aesthetic categories and new craft. It need not mean that search replaces thinking or that all data has to be “visualized” but that new modes engage in new struggles. The project of apprehending leaks will recognize that this feeling may not be produced in a direct way. It may involve machines, collaborations, and durations. It will require experimentation.

To embrace the leak as a cogent cultural force of our times, we need to create more levels, more senses between the celebration of leakiness as such, its critiques of structure, the bite-sized voyeurisms that mainstream media offers, the lengthy analyses produced by academics and analysts, and the vast dump of information that leaks really are. In other words, we have to figure out how to feel a leak.

1. See Humberto Maturana on operational closure, autopoesis and self-organisation, Niklas Luhmann's subsequent and unliked-by-Maturana use of it in sociology and Levi Bryant's recent evocation of Luhmann's work in his book The Democracy of Objects (Open Humanities Press, 2011).

2. Fog catchers are meshes stretched like volleyball nets often on high mountain ridges in arid Peru, causing the condensation of passing clouds into a water supply.

3. A 1980s practice involving Pakistani plays, a VCR, and a Punjabi family we knew.