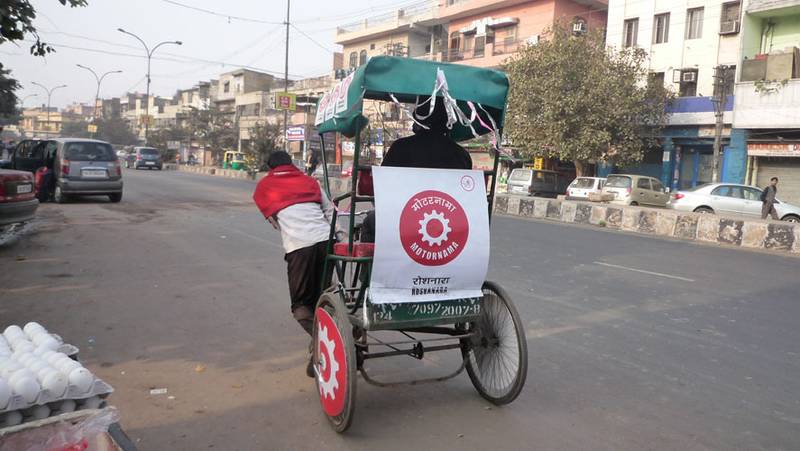 A ride through the  industrial district around Roshanara road, Delhi.
We come across various sites and histories of the "industrial age" in the city,  and its related narratives of automation, pollution, labour and closure.
The tour is on cycle-rickshaws, with ricksha-wallas as narrators and guides.

Sites visited include houses in the shadow of the new metro, a hundred year-old ice factory, a car-cover karkhana, a derelict cinema, motor repair and reboring shops, a printing press transported from lahore, a famous clock-tower, amongst others.

Roshanara road was till about 20 years ago the centre of the industrial city of Delhi, with Transport Nagar, the old Grand Trunk road, Sabzi Mandi, the Beej (seed) Market and related infrastructure all crowded around it. Old residents claim that it was not only Asia's largest engine repair market, but also an upper-class hangout with Palace Cinema and restaurants and other markets flourishing.
In a series of court-initiated "anti-pollution" drives in 1996 and 2000, Roshanara road's small and large industries were forced out of spaces they had been occupying since partition. As transport technology also changed, the repair industries could not compete effectively with new imported cars, authorised dealers and so on. In effect, the "motor" of industrial progress was moved out of the city, or moved past this sector in other ways.

Cycle rickshaws have survived this history. Not in a sense that they emerged victorious, but in that despite court orders (there is an ongoing Supreme court case on their licensing, the culmination of a long period of litigation), police brutality and resistance from resident associations, their numbers in the city have grown from about 20,000 in the early 1980's to more than 900,000 today. The vast majority of pullers live on the street, or in "informal" situations in front of shuttered shops, in side-lanes, etc. Recently, cycle-rikshaws have found favour with green groups and the eco-lobby, as a "non-polluting" form of transport. This discourse largely does not include considerations of where rickshawallas will live, their health and other needs, etc.
Our project then entered this historical and regulatory landscape, and offered members of the public: both locals and visitors, a tour of this landscape of lost punjabi confidence, old machines, labour, bodily risk and local histories.

We worked with about 25 rickshawallas who lived in and around the Beej market, Roshanara Road, for over two months. Workshops and meeting were held in the Roshanara Garden and other locations in the area.

2. Back lane to view buildings still standing but cut in half by the metro project, opposite to a threading factory inside a house. Most small scale factories were closed down in the MCD sealing drive of 2006. Few survive inside residential premises.

4. Stop at the Motor (head) repair shops in the lane on way out.

5. View Palace cinema from the gate, watch a video of projection motor under the banyan tree with commentary by the cigarete stand, Mochi and watchman. Palace cinema was asias largest seater (800) when it was build in the 40's, it was also the first to get a liscence under the new Republic of India in 1948. It has been lying closed for 8 years due to family dispute.

6. Stop at the Factory gate of the Delhi Flour Mill, which is fully functioning. It is the only mill left in this area, as is it supposedly non-polluting.

8. Head into Indra Beej (seed) Market. (audio track: Babu Samjho ishare from film Chalti ka naam gaadi). This stop was optional, and depended how much engagement  the rickshawala had with his travellers. This is where a lot of rickshaw drivers live, their trunks hidden under the platform of the seed shops.

9. OR into the opposite lane to stop at their hang-out: Gurudevs Chai stall, where there is time to talk more over tea and snacks.

10. To the Baraf Khana (ice factory) -established in 1907 down Grand Trunk road.

13. Sri Laxmi Printing Press, a motorised and fully functional letterpress from 1893, brought from Lahore in 1947.

14. Drop off at Roshanara Garden, with rickshawalas final statements.

Roshanara Motornama was part of 48 degrees C - held in New Delhi, December 12 to 21 2008. Curated by Pooja Sood. Organised by the Goethe Institut, Delhi.
A project by Shaina Anand and Ashok Sukumaran