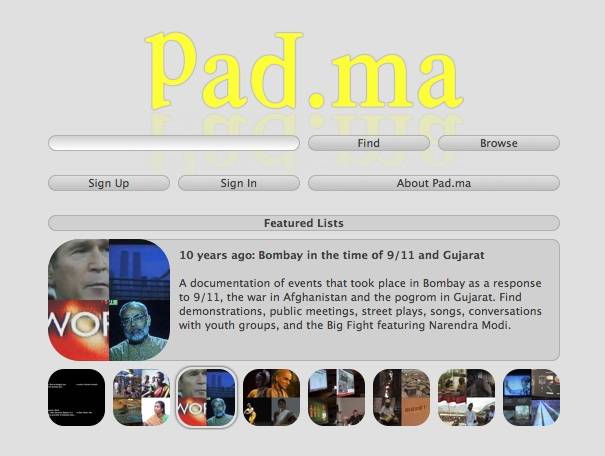 This Sunday, February 26, 2012 we are pleased to announce the launch of a brand new Pad.ma, with an extensive software upgrade that is now ready to roll. Do join us in exploring the many dimensions, provocations and pleasures of the new platform.

Sunday also marks ten years since the February 27, 2002 attack on a train in Godhra, and the anti-Muslim carnage in Gujarat that followed. We remember these events through the Shared Footage Group's (SFG) carefully shot, indexed and annotated video documentation, that is now being put online in stages.

The evening's progamme includes an in-depth look into the new Pad.ma, both in form and content, and the screening of a short film compiled by Faiza Khan from the SFG material - reflecting on the turn of events in one basti in Ahmedabad.

About SFG: The Shared Footage Group was a collective formed in the aftermath of the carnage in Gujarat in 2002. It consisted of  film professionals, film students and many other volunteers. The idea was to document survivors' stories on video so that the footage could later be used free of cost by anyone interested in the material. SFG collected about 250 hours of footage that is now being put online in collaboration with Pad.ma

About Pad.ma:
Pad.ma - short for Public Access Digital Media Archive - is an online archive of densely text-annotated video material, primarily footage and not finished films. We see Pad.ma as a way of opening up a set of images, intentions and effects present in video footage, that conventions of video-making, editing and spectatorship have tended to suppress. This expanded treatment then points to other, political potentials for such material, beyond the finite documentary film or the online video clip.